We edit quality videos for churches, charities, individuals and businesses. Send us your master copy and we will edit it for you remotely.

We are highly skilled, talented and have with a depth of creativity at your disposal.

We excel at meeting our clients' needs, giving quality service and peace of mind — and within budget.

We would be delighted if you contacted us by clicking the green Ask a question tab to discuss your needs. 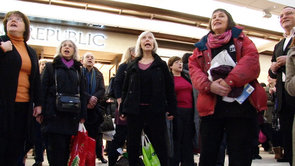 At 11.00am on Saturday 18 December 2010 shoppers enjoyed a Flash Mob of 200 choristers from 16 choirs at London's Brent Cross Shopping Centre performing The Hallelujah Chorus. Three Greenford Baptist Church members took part in the singing and video production. A few hours later Brent Cross Shopping Center was closed early for the first time in it's history due to a snow blizzard.